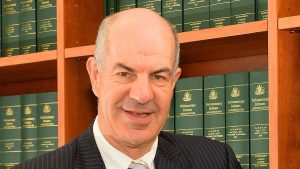 First I want to thank the Accountability Roundtable for this great honour, and wish you every success in your important work. Astonishingly integrity in government and the fight against corruption is not a particularly great area of media interest, and yet victory is by no means assured. Many countries are absolutely blighted by corruption, and people who think that Australia is different and this could never happen to us are deluding themselves. So the work you do is incredibly important. George Bernard Shaw said the reasonable person adapted themselves to fit the world, while the unreasonable person insisted on trying to change the world to suit them. Therefore all progress depended on the unreasonable person. Long may you be unreasonable.

I want to thank my father Allan Thomson, OAM for coming along today. Pretty much everything I have done which could be counted as having integrity is on account of the role model he provided. In this company I should mention that when I developed an interest in public office I suggested to my parents who were members of the Australian Democrats, that they might join the Labor Party. They informed me that they were happy where they were! I figured that anyone who could not persuade his parents to join the Labor Party had no future as a branch stacker, so my Branch stacking career ended before it started!

I want to acknowledge colleagues Rachel Siewert and Andrew Wilkie. I didn’t have so much to do with Rachel, because she was in the Senate, but I saw enough of Andrew up close and personal to know that he is a very worthy recipient of this honour. I am now working for the Alliance for Gambling Reform, and I’ve reflected more than once about the poor way in which the government of which I was a member dealt with his Mandatory Pre-Commitment initiative. I came away with a diminished view of both our Parliamentary leaders during that episode. While the Alliance does not seek to re-open the Mandatory Pre-Commitment debate, we are campaigning energetically for maximum $1 bet limits, which would reduce gambling harm. We’ve been able to reduce tobacco harm., alcohol harm, and road trauma – we should be able to do the same with gambling harm.

A concerted push to clean up our political system is needed. We should have an Independent National Commission Against Corruption. The cross benchers are right about this. We should make campaign donation disclosures in real time, so you have to disclose a donation on your website within, say, a week of r3eceiving it. Both the property development and gambling industries are massively impacted by government decisions, and the potential for corruption is large. I think there should be no campaign donations from companies in those industries. And I like the Queensland model, where Ministers must publish their diaries every month.

As well as sharpening up some of the rules to improve our democracy, we need to improve the culture too. A lot of politicians, public servants, lobbyists and media are seriously out of touch. There was a range of issues where I got stacks of support from voters but found few friends within the Parliament, including my position on free trade, on live animal exports and plenty of others. The biggest gap between the views of the voters and the views of the governing class related to Australia’s rapid population growth.

Now I don’t have time to discuss population growth in its gory glory, but I can’t resist pointing out to this audience that it harms and weakens democracy, by increasing the distance between the electors and their representatives.

As the face to face interaction diminishes, and the distance from voters increases, candidates develop a need for campaign financing, and the sources of campaign donations put stress on the ethical foundations of our political system. The famous Colorado Professor, Albert Bartlett said that in 1950 the population of his hometown Boulder was 20,000 and it had 9 Councillors. Now its population is 100,000 and there are still 9 Councillors. He said that Boulder residents now had only 20% of the democracy they had in 1950 because it’s harder for the individual to access their representative. As a result Boulder now often gets one dollar one vote rather than one person one vote.

Professor Bartlett said there was a crowding out effect which led to people becoming alienated. It gets easier to understand the rise of UKIP and Brexit, of Marine Le Pen, of Donald Trump, of Pauline Hanson, when you get this.

And finally, we desperately need a better culture of debate, which in Australia and elsewhere has become increasingly shallow, superficial , polarized and just plain nasty. In Australia politicians and political parties used to be rewarded for heading to and grabbing the middle ground, for being measured and reasonable.

But now the media have abandoned any pretense to disinterestedly reporting the news, and pitch for segments of the reader, listener, or viewer audience, shamelessly pushing particular ideas and causes; rewarding politicians who inflame and polarize and marginalising those whose ideas are inconvenient. Their desire to exercise power themselves, rather than sit on the sidelines and report the contest, sees them focus ridiculously on party leaders, investing them with superhuman powers.

It used to be possible for backbenchers with something worthwhile to say in Parliament to develop a public profile. Not any more. The media complain about the poor standard of Parliamentary and political debate, but their decisions about what to report and how to report it absolutely drive this. The public knows it too – they know the media outlets are partisan players. This is why Donald Trump has been able to get away with outrageous attacks on them – their credibility is near zero.

Political leaders need to head back towards the middle ground. They need to pursue issues which unite Australians, rather than divide them. They need to listen to the voters and act on what they want. They need to focus on problem solving, not divide and conquer trouble making. And the media and commentators need to give them space to do this, and credit when they do.

Edward Kennedy said that few are willing to brave the disapproval of their fellows, the censure of their colleagues, the wrath of their society. He said that moral courage is a rarer commodity than bravery in battle and even great intelligence. Yet it is the one essential, vital quality for those who seek to change a world that yields most painfully to change.

If we are to lift our political system from its present low ebb, we all need to both show moral courage and to acknowledge it wherever we find it.

Back to Awards page