In 2010, Accountability Round Table created two Parliamentary Integrity Awards for federal parliamentarians. They honour two former members of the federal Parliament, John Button and Alan Missen, in recognition of their outstanding commitment to the values, purposes and duties for which power was entrusted to them as members of the Australian Parliament.

ART Integrity Awards – the Button and Missen Awards – are for MPs and Senators who have demonstrated outstanding commitment to the public interest in the performing their role with:

Honesty, Civility, Independence and/or Political Courage in one or more of the following:

THE MISSEN AWARD is awarded to Back benchers and Cross benchers including independents and members of minority parties.
Missen Award Criteria

To quote former Chief Justice Sir Anthony Mason’s presentation of  the inaugural awards in 2010, “The object of the awards is to offer public recognition and support to those members of parliament whose service to the public bears the hallmark of integrity. It is hoped the awards will focus attention on the vital importance of integrity and accountability in public life, encourage public understanding and discussion of government accountability issues, and in this way counter the growing cynicism about our parliamentary democracy.”

Awards to the 46th Parliament will be made on the 5th of September 2022 at Parliament House Canberra.

The John Button Award went to

The Hon.TONY SMITH MP. 30th Speaker of the House of Representatives. Member for Casey from 2001 to 2022.
Citation.

The Alan Missen Award went to

No John Button Award was made for this term of Parliament as the awarding committee found no senator or member who met the criteria.

Presented by The Hon Murray Gleeson, AC, the 11th Chief Justice of Australia, in office from 1998 to 2000

The John Button Award went to:

The John Button Award went to: 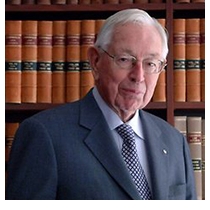 The Accountability Round Table launched its ‘Button – Missen’ Parliamentary Integrity Awards on the 11th March 2010, at the Monash University Law Chambers.

The Launch Speech was made by Tony Fitzgerald, QC, Chair of the Commission of Inquiry into Official Corruption in Queensland and judge in the Supreme Courts of Queensland and New South Wales.

The speech covered matters of increased domination by sectional interests of  Australia’s public life and parliaments, and the public inertia about its effects on official misconduct and the pursuit of populism by governments.  Tony Fitzgerald argued that legal and ethical constraints are necessary to prevent manipulation to advance personal and group interests which risk future dissipation of the social cohesion necessary for society to successfully function.