EVENT VIDEO. Political Donations. A problem for our democracy?

On Wednesday – 23 March, 2022, ART’s Charles Sampford and Ken Coghill addressed the Victorian Fabian Society on “Political Donations. A problem for our democracy?”.

Political donations are a problem because they are reported far past the time they are made, the actual donors are frequently hidden behind impenetrable company structures and a high dollar threshold for reporting them means most fall below the reporting requirements. Most importantly, donations are an anti democratic attempt to influence political outcomes. Political influence should be the aggregate of many voices, not a few artificially amplified by wealth.

But the solution is not to simply cap the level of donations to political parties. Unless caps are also put on electoral spending by parties and candidates, donors, candidates and parties will continue to find ways to evade donation detection. 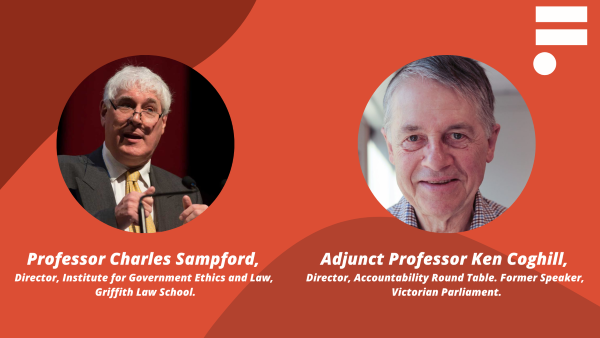 Charles Sampford on “How Money Talks to Politics”.

Ken Coghill on “How to Improve Integrity in Politics”

Charles Sampford is Director of the Institute for Ethics, Governance and Law, a joint initiative of United Nations University, Griffith, ANU, QUT and Jindal. His numerous publications include the 2021 report “Integrity Now – 21 reforms to restore the rule of law, accountability and public trust “, written with the Accountability Round Table, which touches on many issues of political integrity including political donations.

Ken Coghill is an Adjunct Professor in governance and parliamentary studies at Swinburne University and a former Speaker of the Victorian Parliament. He is on the Board of Directors of the Accountability Round Table and is an outspoken critic of our current electoral funding system with a special interest in caps on campaign spending. He is a regular media commentator on political donations and related government integrity issues.

This briefing paper sets out ART’s thinking on the twin problems of funding election campaigns – the scramble for donations to provide the wherewithal for candidates to run, and the continual escalation of the costs of running a campaign.