KEEPING THEM HONEST: the case for a genuine national integrity commission and other vital democratic reforms, a new book by Stephen Charles and Catherine Williams was launched on Monday 4th April.

See below for Stephen Charles opinion piece in The Age on 16 04 2022 on the need for a Federal Integrity Commission. 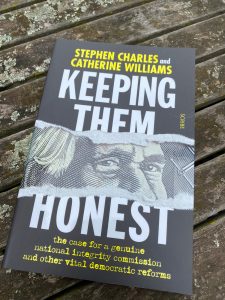 Over the last few years, instances of the federal government spending taxpayers’ money to gain improper political advantage in elections have continued, with many hundreds of millions of dollars being spent on the Community Sport Infrastructure Program (aka the Sports Rorts) and the Urban Congestion Fund (the Carpark Rorts). As Stephen Charles writes, these electorally targeted pork-barrelling exercises are better understood as political corruption, which can take many forms but essentially involves dishonest conduct that undermines trust in our democratic political system.
Keeping Them Honest points to the crucial absence of a federal integrity commission to expose corruption in government and public administration, and to hold wrongdoers to account. While the federal government promised to establish such a commission in 2018 (a promise since abandoned), Stephen Charles argues that, in any case, its insipid terms would protect — rather than expose — ethical breaches by federal politicians.
As well, as Catherine Williams reveals, there is an overwhelming need to deal with the dark side of Australia’s political system: the hidden influence of political donors and lobbyists, including the revolving door between lobbyists and former ministers; the absence of controls on electoral expenditure and political advertising; and the cavalier, unregulated expenditure of public money. 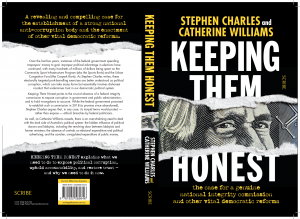 Morrison and his cabinet are frightened of an effective integrity commission

“The prime minister has explained his refusal to establish a national integrity commission on the basis that Labor has rejected his detailed proposal for one. Never has anyone in office justified the breach of an election promise on the basis that the opposition opposes it. Scott Morrison’s explanation is a pathetic attempt to justify the indefensible.”….

The prime minister has explained his refusal to establish a national integrity commission on the basis that Labor has rejected his detailed proposal for one. Never has anyone in office justified the breach of an election promise on the basis that the opposition opposes it. Scott Morrison’s explanation is a pathetic attempt to justify the indefensible.

The opposition could not possibly have supported the government’s useless and contemptible model. The truth is Morrison and his cabinet are frightened of an effective integrity commission, and what it might expose, and they have very good reason to be.

The High Court has made it clear that the executive does not have free rein to spend public money as its members wish, and that the executive must, with rare exceptions, have statutory authority for their spending. This government has developed a series of programs and grant schemes under which vast amounts of public money are spent, in an attempt to avoid the requirement of obtaining statutory authority.

The sports rorts were exposed by the auditor-general in a report released in January 2020. The report said that the Australian Sports Commission had prepared well-structured guidelines with transparent weightings, but the minister’s office disregarded these and began its own assessment focussing on marginal electorates. Professor A.J. Brown, a board member of Transparency International, said of the sports program: “Fundamentally it is corruption. What has happened here is corruption.”

In the Senate committee which investigated the sports rorts, submissions were made by four of the leading academic constitutional lawyers in this country, the effect of their testimony being that the program was not authorised by statute, was unlawful, and a breach of the rule of law. It was also in flagrant defiance of rulings of the High Court.

The prime minister appeared before the National Press Club lunch in January 2020, at which he was questioned by at least eight journalists about the sports program. Morrison said there was nothing wrong with the program, and that the minister, Senator Bridget McKenzie, was simply doing her job, exercising her discretion in the public interest.

He treated the journalists’ reasonable questions with arrogant contempt, brazenly brushing aside uncomfortable points. No apology of any kind was made for this appalling piece of corrupt conduct, the abuse of $100 million of taxpayers’ money, spent not for the sports program, but for the Coalition’s electoral prospects. Other members of the cabinet lined up afterwards to repeat this nonsense. No one offered any apology or remorse for this conduct.

This was followed by a second report of the auditor-general in mid-2021. The Coalition’s Urban Congestion Fund was set up to increase traffic network safety and efficiency. The amount in question was $660 million, a component of the fund, which had grown to $4.8 billion as at March 2021. Under the National Car Park Fund, 47 projects were selected, half of them allocated on a single day, the day before Morrison called the 2019 election.

All were in vulnerable seats, there were no merit or eligibility criteria, no cost-benefit analyses, and no significant consultation other than with Coalition members and some unelected candidates. In the process of determining the allocation of funds, a marginal-electorate list was shared between the offices of the prime minister and the infrastructure minister, Alan Tudge.

In February 2022, a third report of the auditor-general concluded that yet another example of a party-politically biased federal grants program was the $184 million Safer Community Fund, set up in 2016. The report said that grants made under this program also favoured government-held seats, and that decisions were often made without clear and recorded justifications.

These three examples of political corruption alone total some $944 million, and the Coalition had many other such programs.

As at the last election, the Coalition is therefore known, on the reports of the auditor-general, supported by the evidence given later at Senate committee hearings, to have engaged in massive politically-corrupt spending. The last election was tight and the result was close.

Notwithstanding that Labor contributed to its loss with a flawed campaign, what is evident is that the Coalition’s massive spending may well have been the factor that gave it the win. Since the prime minister and cabinet members have shown no remorse, and since the government again faces unfavourable polls, it is more than a reasonable assumption that the Coalition will repeat this corruption at the coming election.

Pork-barrelling is not only political corruption, it is a breach of the rule of law and an assault on our democracy – in that it is an attempt by an unpopular government to entrench itself in power by the misuse of public funds.

The opposition and most crossbenchers have made it clear that they seek an effective integrity commission, not the sham that is presently proposed by the Morrison government.

These are the reasons why the Morrison government has broken its election promise to establish a national integrity commission.

Stephen Charles, QC, is a former judge of the Supreme Court and the Court of Appeal. His book about the need for a national integrity commission, Keeping them honest, was released earlier this month. It is co-written with Catherine Williams.