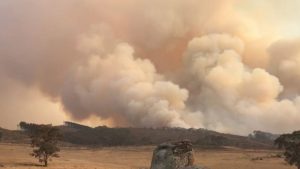 David Harper, Former Supreme Court Judge and now Secretary and Director of ART writes to his local Federal member,The Hon Michael Sukkar, Assistant Treasurer. We should all do this….

Drought, hot weather and bushfires – the lesson and the response

The lessons of this summer of horrific fires are obviously important. As the Federal Government has emphasized, Australia has always been subjected to very hot weather, significant droughts and, since European settlement at least, damaging bushfires. This summer, however, has seen a combination – in every State – of exceptionally severe drought, exceptionally hot weather and exceptionally intense fires. The prospect of the exceptional becoming the new normal is of acute national concern. And the Federal Government’s response must reflect that concern.

Part of that response must be an examination of the connection between the current crisis and climate change. If the climate is warming, Australian summers will last longer and be hotter. Droughts will be more frequent, and bushfires more destructive. The Federal Government cannot dismiss this possibility, or the conclusion that Australia is peculiarly vulnerable to climate change. And if Australia is peculiarly vulnerable, Australia must take the lead in negating its effects.

A government’s first duty is to protect its citizens against imminent danger; and protection at times of present and future peril necessitates policy based upon facts and logic. These readily identify the principal cause, and severity, of the fires burning since spring. No single Australian year has been warmer than 2019. No single Australian year has been drier. No single Australian year before 2019 has held the record as both the warmest and the driest year Australia has known since weather recording began. According to the Bureau of Meteorology, temperatures across Australia in 2019 were 1.52◦C above the 1961-1990 average. As a consequence, no Australian fire season has seen fires so widespread, or beginning so early, or as intense, or less readily susceptible to safe fuel reduction. And 2019 followed a decade during which, year by year, temperatures were above average. The figures issued by the Bureau of Meteorology cannot be denied, and are illustrated in the Bureau’s graph which accompanies this letter. That graph is symptomatic of a world getting warmer. Australia is experiencing the additional burden of becoming drier as well.

Our susceptibility means that Australia must have governments which are dedicated to preventing an increase in average global temperatures by more than 1.5◦C above those prevailing at the beginning of the 20th century. The duty to protect demands nothing less. It is therefore desperately disheartening to hear the Prime Minister and other Ministers repeat that Australia is responsible for only 1.3% of greenhouse gas emissions, as if our emissions are irrelevant. The average Australian has four times the carbon footprint of the average global citizen. Per capita, we lead the world. Should Germany be excused further involvement in reducing climate warming because its per capita emissions are below ours, and it is responsible for only 2% of the world’s total? Should you be excused from throwing rubbish from your Ministerial car because your contribution to the rubbish on the road was minute? If, as the facts and the logic proclaim, Australia will be a prime victim of increasing drought, increasing temperatures, longer fire seasons and fewer opportunities to reduce fuel overload, Australia should be leading the way in the battle to remain within the 1.5◦C target. We should be leading on the ground and in the forums of the world. Yet we run with the halt and the lame.

Climate sceptics are prone to seize upon minor issues as if they explained everything. The Federal Government is correct in stating that fuel overload has increased the severity of the fires. The Government is also correct to point out that no single weather event can be directly attributed to climate warming. These matters are not – or should not be – issues of the political left or the political right. But they must be seen in perspective. For example, concentration upon forest fuel loads as the principal culprit in an already horrific summer is self-serving at best and, at the governmental level, dangerously devoid of rationality. The reduction of hazardous fuel could not be carried out across millions of forested hectares. It is equally wrong to conclude that, because a specific climate event cannot be directly attributed to climate change, that factor has had no influence and can be discounted. Such arguments obfuscate in the hope of escaping responsibility for political failure.

Another claim is that the economy cannot afford the cost of effective climate action. The answer is that the cost of inaction is far greater. Assistant Treasurers know that, in general, it costs less to conquer a challenge before it arises than it does to remedy the consequences after they have wreaked their vengeance. According to The Australian of Saturday 11 January 2020, the current fires have already cost $5 billion. The question in the context of climate change is not the cost of avoidance; it is the cost of attempting to fix the unfixable after the worst has been done.